Secrets and Fries: McDonald’s £295 million tax dodge | War on Want
Skip to main content
Our new report ‘Secrets and Fries’ exposes how McDonald’s has been driving billions in global profits through the City of London, but not stopping to pay its share of UK tax. McDonald’s has been using a circular, paper transaction to shield the income received in London from being taxed in London – depriving the UK public funds of at least £295 million in tax.

At the same time, McDonald’s was able to grab £872 million in UK government tax breaks and support during the Covid-19 pandemic in 2020; including £229 million from the Coronavirus Job Retention Scheme, and £143 million from the Eat Out to Help Out Scheme. 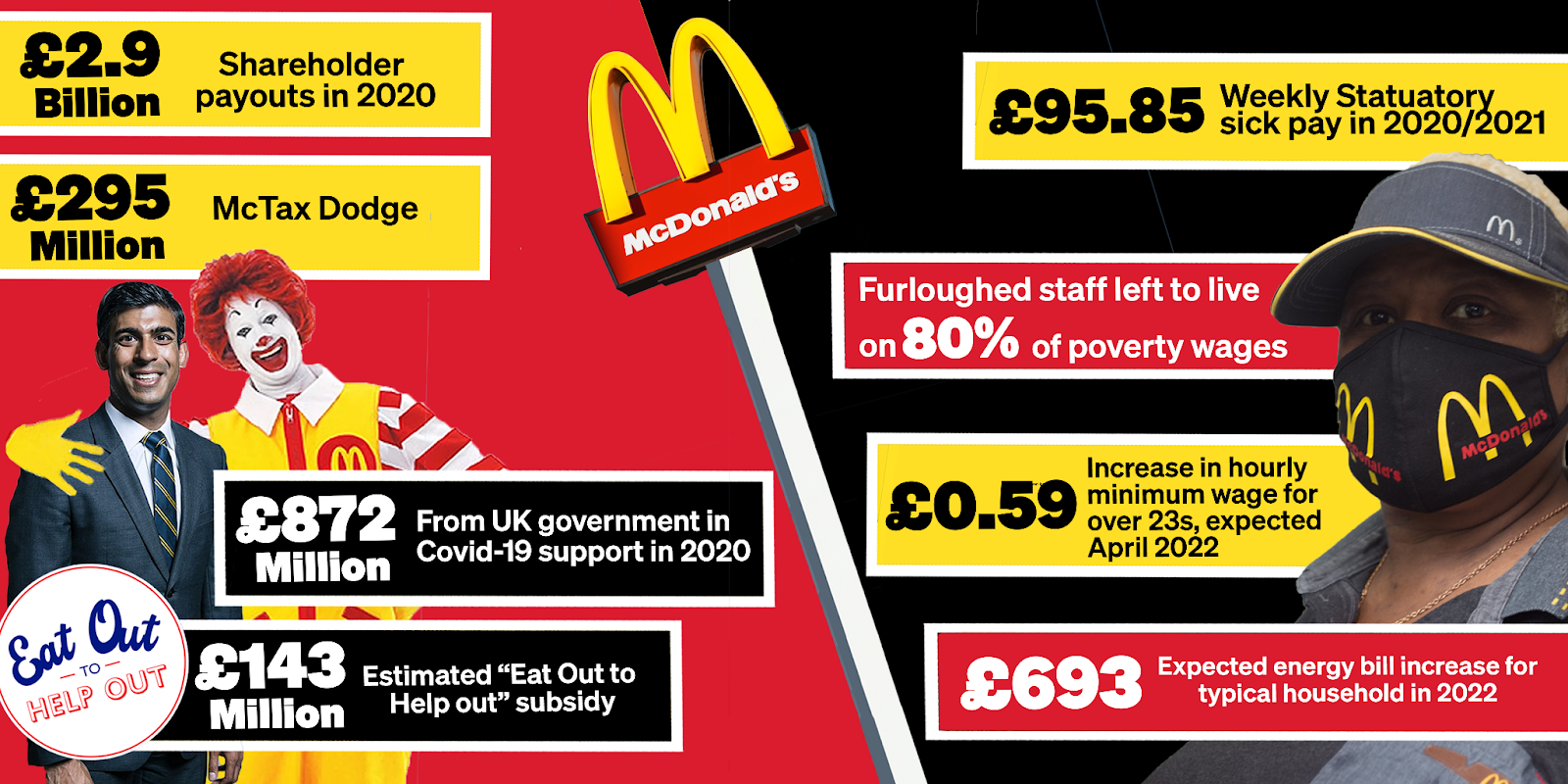 McDonald’s paid its workers poverty wages whilst they pushed sales through the roof during Covid-19 lockdowns – all while rewarding shareholders with a record £2.9 billion payout, inflated by the hundreds of millions in UK public funds that flowed into McDonald’s UK business.

Now, UK politicians want ordinary workers to pay for the Covid-19 bailouts big business received – instead of cracking down on corporate tax dodgers. That's why we're calling on the UK government’s tax authority, HMRC, to launch a thorough investigation into McDonald’s tax affairs.

HMRC must launch a thorough investigation into McDonald’s tax affairs

Read the 'Secrets and Fries' report

Watch our video explainer of the McTax dodge

Selling ‘ideas’ rather than burgers

McDonald’s operates a franchise business model, which enables it to minimise its tax bills. That’s because profits get taxed where they’re made. So rather than selling burgers, McDonald’s sells the ideas behind the burgers (branding and intellectual property rights). Ideas are much easier to move than a burger restaurant – they can be moved to wherever they’ll get taxed the least, such as a tax haven. This process is called ‘profit-shifting’.

McDonald’s then sets up subsidiary companies – legally separate entities that it owns – that charge franchises for using McDonald’s packaging, trademarks, and other ‘intangible assets. The royalty payments that McDonald’s can then collect on selling its branding and intellectual property rights are enormous – and all count as ‘expenses’ for the franchisee and national McDonald’s subsidiaries, meaning there’s less tax to pay in the country where the burgers are sold.

McDonald’s used the tax haven of Luxembourg to avoid paying €1 billion on its income from across Europe. After its Luxembourg tax arrangements were exposed by War on Want and others in our 2015 UnHappy Meal report, McDonald’s moved its tax base to the City of London.

With Brexit on the horizon, placing its international tax base in the UK would move McDonald’s outside of the EU’s jurisdiction, and give it access to the UK’s favourable corporate tax regime. The UK government has been keen to attract multinationals’ intellectual property to London by offering tax breaks. UK parliamentarians must address the City of London’s role as a tax haven for global corporations.

McDonald’s billion dollar IOU to itself

Instead of using cash for this transaction, UK-based McD Global Franchising Ltd paid for the franchise rights business using three loan notes – financial debt instruments similar to an ‘I owe you’ (IOU), a written agreement acknowledging debt. This note was then passed around the world via different McDonald’s subsidiaries, until eventually it came back to McD Global Franchising Ltd in London. Unable to owe itself money, McDonald’s cancelled the IOU.

However, the rights that UK subsidiary McD Global Franchising Ltd had acquired stayed on the books. By using an accounting process called amortisation (similar to depreciation, whereby a business asset loses value over time) – it can claim an expense for at least ten years, for the value of the rights dropping as they age, meaning less profits for it to pay tax on.

In total, this amounts to a potential tax saving of at least $40 million per year or £295 million ($400 million) over a decade. These figures are calculated at the UK corporate tax rate of 19%, and based on the amortisation McDonald’s claimed as a tax expense in 2018.

McDonald’s circular paper transaction enables royalties that McD Global Franchising Ltd receives from McDonald’s entities around the world, including from Europe, the Middle East and Africa, to be shielded from taxation in the UK. This will deprive UK public funds of at least £295 million in tax revenue over ten years.

We must not let politicians force ordinary working people to fund the bailouts big business received, instead of cracking down on corporate tax dodgers. We must demand politicians rebalance our rigged economy in favour of workers and the communities where multinationals operate.

The UK government must crack down on corporate tax dodging

We will never stop fighting for workers' rights

Decent work and a living wage are not only basic rights, but a key route out of poverty. Through organising, the collective voice of workers has won rights and decent work for millions of people.
29 April 2022
Image

McDonald’s workers face poverty wages, insecure hours and abuse at work. Workers are coming together in the McStrike to build power in numbers and win better working conditions, including through bold strike action.
More about McStrike